In 2016 Bo Burnham released Make Happy which ended with a Kanye West parody called “Can’t Handle This”. Throughout the song Bo comedically joked about the size of Pringle Cans, being uncomfortable at the Gym and Chipotle ruining his burrito. It’s during the Chipotle portion of the song that the mood changes.

The mood continues to shift as he repeats over and over “I can’t handle this right now” before he ends with “Look at them they’re just staring at me like ‘come and watch the skinny kid with the steady declining mental health and laugh as he attempts to give you what he can’t give himself’.”

The song abruptly ends with Bo stating “Thank you, I hope you’re happy” and walking off stage into a room where he performs a song on piano called “Are You Happy?” which outlines his thoughts on the special and asks the audience about their mental state repeating over and over “Are you Happy?” Throughout the song he also begins explaining his constant panic attacks and anxiety about performing.

He leaves the room to play with a dog as strings swell and as far as the audience knows… Bo was done performing.

Outside of making one of the best films of the last decade (Eighth Grade) and appearing in this year’s best original screenplay winner Promising Young Woman; Bo spent most of the last 5 years being fairly quiet. Then suddenly it was announced he had a new comedy special coming to Netflix that was filmed by himself in a single room of his house throughout the pandemic.

It would take hours to fully discuss all the layers of nuance displayed in 82 minutes. While the songs capture the energy of the last 15 months tackling topics like trying to be funny during such a bad time in the world and having to facetime relatives; it’s the interstitials before the songs where we see Bo slowly losing his mind and we have to wonder, has he been getting worse since Make Happy?

We get the answer during the interlude of the song “All Eyes On Me” where he details the last 5 years in a few words:

“Wanna hear a funny story? Five Years ago I quit performing live comedy because I began to have severe panic attacks, which is not a good place to have them. So I quit for five years and spent that time trying to improve myself mentally. And you know what? I did. I got better. I got so much better than in January 2020 I thought “You know what? I should start performing again. I’ve been hiding from the world and I need to re-enter. And then the funniest thing happened…”

Early in the special Bo stresses that he wanted to leave this world better than he found it but is afraid comedy won’t help. This comes up constantly in the special as he expresses multiple times his expectations and hopes for bringing joy in such a joyless time.

At first he states that he hopes we enjoy it and that it does for us what he’s done for him the last few months and kept him from wanting to put a gun in his mouth.

Mid-way through the special he pops up again saying that he has a desire to finish the special but is also terrified of finishing it as once it’s done he has nothing else to look forward to.

Finally near the end of the special Bo is unable to physically say that he’s been making a special for a year without having a breakdown that ends with him on the floor crying while saying “I’m not well”.

It’s a difficult watch throughout but I want to highlight 3 moments that hit close to home for me and pretty much anyone else who struggles with their own mental health.

Through the multiple over layered you can hear Bo drops two extremely insightful sentences about himself when he says, “It’s pretty unlikeable that I feel this desperate need to be seen as intelligent” as well as “I’m so worried that criticism will be levied against me that I levy it against myself before anyone else can”

The sequence is an extremely funny but also useful tool in explaining to others what it’s like to have those negative voices in your head that consistently are pointing out your shortcomings. I am consistently caught in a desire to appear smarter and more likeable than I can often see myself and is probably the biggest driving force of my anxiety and panic attacks.

2) The Problems with the Digital Age

Bo performs a short song called “Jeff Bezos” that ends with him screaming before it jump cuts to him on his bed talking into a microphone resting beside his face on the pillow. During his monologue he expresses that perhaps creating a digital landscape where we never have to interact face to face is counter intuitive to our society as a whole.

This comes up again in the song “Turning 30” where he sings “Your Phone is poisoning your mind so when you develop a dissociation mental disorder in your late twenties don’t come crawling back to me”. It’s impossible to hear the lyrics and not imagine it’s Bo talking about himself as a celebrity who primarily came up as a kid on the internet playing songs in his bedroom.

We are extremely trapped in a cycle with the internet where we crave constant attention but fear human interaction and for many of us we develop a dissociation mental disorder because of it.

The topic is breached earlier in the song “Stuck in a Room” where Bo sings about his desire to leave his  bedroom. In the narrative of the song he finally leaves the room before quickly returning singing the lyric “Look who’s inside again, went out to look for a reason to hide again’. Highlighting that sometimes we put ourselves out there just to have an excuse to run away, hide or complain later. 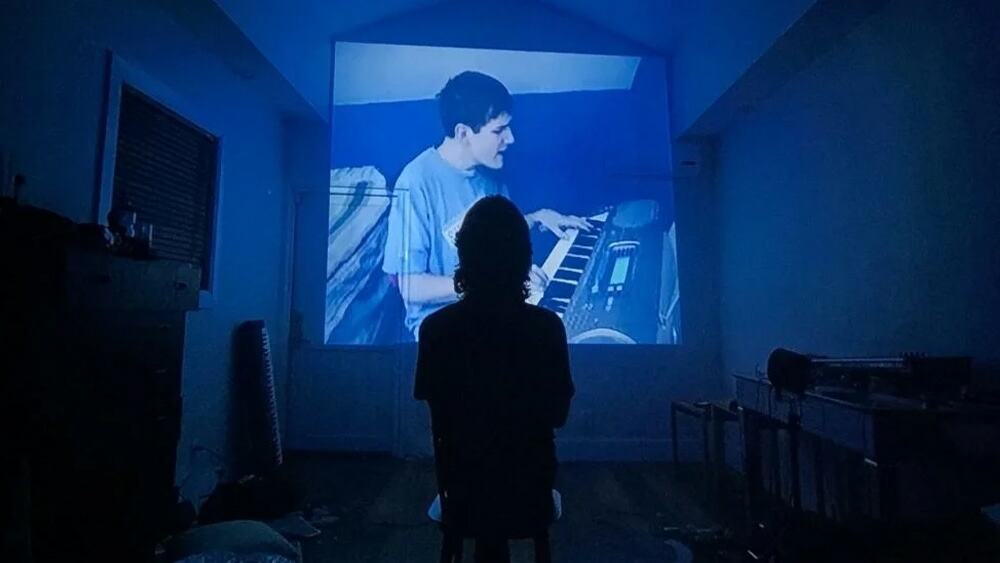 3) Joking About Suicide
Near the end of the aforementioned “Turning 30” Bo sings that he’ll give himself another ten years and kill himself when he turns 40. Immediately after this we cut to Bo recording a clarifying statement that he’s not going to kill himself and that you (the audience) also shouldn’t kill yourself because you have so much to live for. The speech is the same generic rhetoric anyone who struggles with depression has heard a million times before but it’s flipped when Bo reveals himself sitting in a chair looking depressed and the speech he’s giving is being projected onto his white t-shirt.

It’s only at this time that it becomes clear that the speech isn’t intended for the audience but for Bo himself. It’s a simple effect that beautifully captures the pep talks we give ourselves to “get out of bed, put our best foot forward and live damn it”. They will always feel dishonest to ourselves.

I find myself wondering if this is also making a statement about our abilities to give advice that we struggle to accept ourselves to others? As someone who constantly struggles with depression and anxiety I have the best advice for everyone on how to deal with anxiety while almost always failing to put that advice into practice myself.

At its core, Bo Burnham Inside is one of the rawest and most pure looks at depression only highlighted by the shared empathy we have all going through a global pandemic. It is a masterpiece that will be analyzed for years to come.

Ready To Get Started

Take the first step towards the future you deserve.

What Our Clients Say

Take the first step towards the future you deserve.
Get Started

Be the great person you were always meant to be.